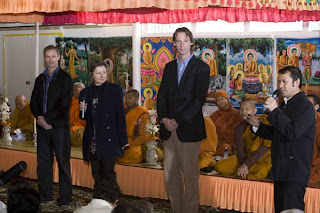 James, Annie and Rob at the Blessing with Chakara Lim 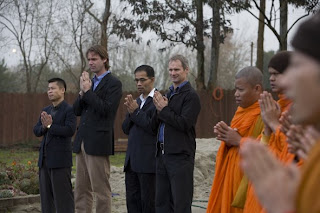 Our first day’s filming in New Zealand went smoothly, beginning with our being blessed by Buddhist monks at the temple in Takanini. We headed off early to the outskirts of Auckland, where the suburbs blend into farmland. Behind what looked like a farmhouse was a large shed filled with colour, posters, ribbons, cloth — the beautiful burnt oranges and browns of Buddhism. We filmed the preparation, the monks (who came from Laos, Tibet, Thailand as well as Cambodia), mounting flags along a concrete wall at the road frontage, then captured some shots of the Cambodian community drifting in, older women making food, children running around, friends chatting in the early morning light. 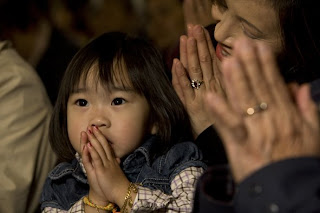 At the Blessing ceremony

It felt much like Cambodia although I tried to frame some of the Kiwi elements in shots, too — the landscape, our particular washing lines, Non Smoking signs and so on. One of the monks then oversaw the flag-raising -- the New Zealand and Cambodian flags mounted together. There was some haunting singing by the flag pole, during which it began raining which felt atmospheric.

The actual blessing was amazing too, about 10 monks all lined up chanting and tossing water on us with slender sticks. The chanting is very mesmeric. Rob, James and I each spoke briefly, with our associate producer Chakara Lim translating skilfully. The community is very interested and incredibly supportive – some had travelled from Wellington for the event. 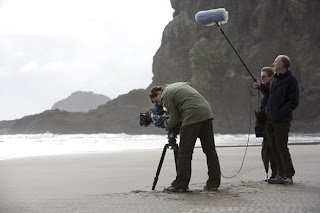 The crew at Piha

Amy Wang from Asia Down Under was filming too, a spot on the “making of” for the show – so people should look out for that. She interviewed us, but also Sarath Lim, the president of the Cambodian (Khmer) Community of New Zealand, a gracious and dignified man who underwent the trauma of living in Cambodia under the Khmer Rouge. We then took off for Piha Beach, where we filmed the “briny” which was doing its usual West Coast thing, wild waves, cascading skies etc. I want these shots as an “opener” to a sample I’m editing to help us with further fundraising. Although we have gotten good funding from NZOA and TV3 and in fact, many donations from the Cambodian community and others, this is an ambitious film as we will be travelling with a crew around Cambodia and in addition, we would like to use archives which can be expensive. 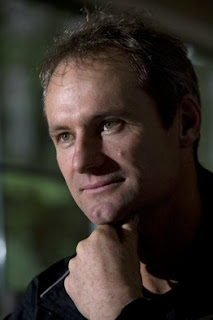 I want to follow up our Hotdocs contacts with an example of what we have filmed thus far so will send them a sample as soon as I can. The sea plays a bit part in our film – the Hamills, as children, swam, surfed and sailed around Whakatane and the Heads; Kerry was seized off his beloved boat, Foxy Lady; and Rob, of course, achieved the almost unachievable, rowing the Atlantic in 41 days. After getting some picturesque shots off the rocks, he headed for the warmth of Dave the soundperson’s house, where we did another “diary interview” with Rob, following up one we had done in the UK, and then we relocated to the couch, where he read through some of the so-called “confessions” extracted from his brother and John Dewhirst, the Englishman who suffered the same fate as Kerry.

Understandably, Rob got pretty emotional and it can be difficult to keep filming at those times – one always feels so intrusive. The final scene of the day was my “replicating” one of the typed confessions – James had tracked down an old Remington and we finished up the day with me punching out “highlights”. Those Remingtons certainly have a different finger action to my MacBook Pro. So all in all, it was a pretty full day and I look forward to seeing Jake’s footage. Here are some stills from the day, filmed by a real “pro” Marcel.